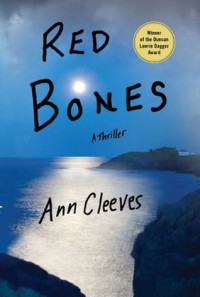 This is the third of Anne Cleeves' tales of mystery in the Shetland Islands. The primary action occurrs on the Island of Whalsay which is to the east of "Shetland Mainland", which is itself an island as well. Inspector Jimmy Perez' somewhat inept sidekick, Sandy Wilson, grew up on Whalsay and has oodles of relatives there. One such relative is his grandmother, Mima (actually Jemima). On a visit to Whalsay, Sandy drops in to see Mima for a wee dram on his way to his parents' place. But he finds Mima prone on the ground apparently killed by a shotgun discharge.

Sandy's cousin Ronald admits to have been "rabbiting" that night, and assumes an errant shot hit Mima, who was not normally out at such a late hour. He appears to be contrite, expresses guilt, and assumes he'll be punished in some way.

But, one does have to investigate things. Inspector Perez comes up to Whalsay to have a look around. Superficially, Mima's death does appear to be an accident, but Perez isn't totally convinced and wants to dig a bit more. With luck Sandy can ask seemingly innocuous questions of his relatives and get a better handle.

There's an archeological dig on Mima's property. It's a Ph.D. project for Hattie James. She's being helped by Sophie something-or-other. Hattie is convinced the site was once the house of a merchant back in Hanseatic League days, i.e. 14th or 15th century.

Not a lot of progress is made, but then Hattie calls Perez. She seems to be very upset and wants to talk to him. But by the time Perez gets back to Whalsay, Hattie has been found in one of her trenches (again by Sandy), an apparent suicide.

Perez isn't convinced about either the "accident" or the "suicide" hypotheses, so keeps digging. Eventually, it all comes out. A pretty fun read. I now have a hankering to visit the Shetland Islands.