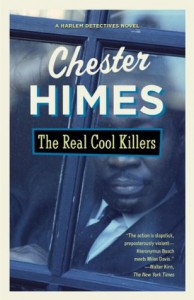 This was a bit silly, and very rough. I don’t know if it portrays life in Harlem in the 1950s realistically or not. If so, we comfortably-well-off white folks should all be ashamed.

A few years back, some of the characters in an Easy Rawlins novel I was reading argued over who was the best author (meaning African American author, I presume), and they concluded it was Chester Himes. So, of course, I had to read me some Chester Himes. I think this might be my third or fourth such endeavor.

Chester Himes wrote some cops-and-robbers-in-Harlem kinds of books in the 1950s featuring Grave Digger Jones and Coffin Ed Johnson. This is one of them. Cotton Comes to Harlem is likely the most famous of the series. I dunno, they seem a bit rough for my tastes, lots of police brutality, not always white on black, Grave Digger and Coffin Ed can mete it out as well. But, perhaps I don’t much know Harlem in the 1950s.

Anyway, we begin with a couple of black guys in a bar threatening a while guy. One starts wielding a knife at the white guy. To calm things down, so to speak, the bar tender chops off the knife wielding arm. The white guy leaves, followed by another black guy wielding a gun. A few blocks away, the white guy is shot. A crowd gathers, including a teenage gang dressed up as Arabs, long robes, long beards, shades, and so forth: "The Real Cool Moslems".

Well, Grave Digger and Coffin Ed are johnny on the spot and arrest the black guy from the bar with the gun. But then, somehow there’s an altercation and the Real Cool Moslems make off with the alleged killer, Coffin Ed shoots one of the “Moslems” and is suspended from the force. Grave Digger is left with a mess to clean up.

And quite a mess it is. First, he has to find the guy he'd arrested. That meant finding the Real Cool Moslems. Then, they discover that the gun they confiscated from the alleged killer only shot blanks, so someone else must have shot the white guy. An additional complication is that Coffin Ed's daughter appears to be involved with the Real Cool Moslems in some way. They call her Sweet Tits!

Well, eventually, Grave Digger gets it all straightened out, but not, of course, before lots of people are beat up, shot, and so forth.