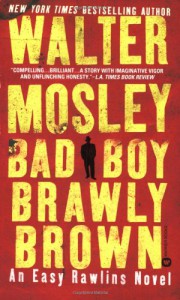 I read Walter Moseley to help me better understand issues related to race. His prime character, Easy Rawlins, has lots to say about race, and how he must go about doing things to avoid “race issues”, especially when it comes to dealing with the cops.

I first came upon Easy Rawlins quite a number of years ago on vacation. So, I’ve continued to read him on vacation, when I have more time to concentrate, ruminate, and finish a book. This latter issue is important to me because I was told back in the day that I read at only half the speed required for success in college. Despite that handicap, I did manage to get me some degrees over the years.

Anyway, I got started in the middle of the series, and worked my way to what was, a few years ago, the end. So, a year or two ago, I decided to begin at the beginning and work until I found the first one I’d read. Easy begins his adventures in the 1950s, just after World War II. In this book, we’re in 1964, when civil rights issues are coming to a head.

Easy, has a checkered past, but is trying to go straight, so to speak, so as to be a good father to his two children, Jesus or Juice (17 or so), and Feather (7 or 8). So, he’s working as the head janitor at the Sojourner Truth Junior High School in Los Angeles. But sometimes, his old past comes back to him. He used to “do favors” for people. Generally the favors involve extracting them from something sketchy.

An old friend, John, who used to be a bar tender, wants some help. It seems that John’s wife, Alva, has a son about whom she is worried. Her son, Brawley Brown, has disappeared and also appears to have become involved with people who are bound to get him into serious trouble. So, could Easy find Brawley and send him back to Mama?

On the surface, Brawley has become involved with a sort of civil rights group (probably a Black Panther stand in). Superficially, they want to set up better schools for children and see they have safer environments. But there are worries that some of the folks in the group are also interested in some kinds of violent interventions, and perhaps also some sketchier things.

So, anyway, Easy eventually works things out, fingers some of the sketchier folks and gets Brawley returned to his mother. Something like that.

Oh yeah, a recurring theme through the book, something on which Easy broods a lot, is that he thinks his friend, Raymond Alexander, a.k.a. Mouse, is dead. No one knows for sure. Mouse was in intensive care, then was snatched away from the ICU by his girlfriend (spouse?), Ettamae. No one has ever seen Mouse's body, and Ettamae seems also to have disappeared. Anyway, Easy is bothered by this, in part because he is responsible for the injury that got Mouse into the ICU, and broods incessantly about this through out this book. In some ways, it's his channeling Mouse that helps him solve the Brawley Brown problem.
Tweet