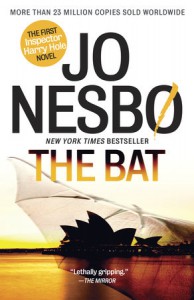 So, my spouse dragged me to Florida for a week. Her sister lives in a motel, just a block from Hollywood Beach, and they had a vacancy. So we joined her.

The motel is sort of U-shaped, with a central courtyard. Many of the tenants come for weeks, if not months, at a time. One such tenant was a woman of a certain age, perhaps slightly more so than I even, named Judy. Judy was from Michigan, and quite proud to have graduated from Michigan State Univ., which was also my father's alma mater. Anyway, Judy wandered around all day with a book in her hand. She never seemed to make any progress reading the book, but it was her constant companion. [In all fairness to Judy, she did, finally, finish up that book after about 7 days].

So, we have a Norwegian detective named Harry Hole. The name is Hoo-leh, and not to be pronounced in any way that implies an orifice of some kind. Harry will settle for Holy, which is what he was called by the Australians in this book.

Yup, Australians. Harry was sent off from Norway to Australia to help with an investigation of a B-level Norwegian celebrity, Inger Holter, who was brutally murdered in Australia. He is paired up with Andrew Kensington, an Australian policeman who features Aboriginal bloodlines. During the course of the investigation, Harry strikes up a relationship with a red-headed, Swedish bar maid, Brigitta Enquist. They come across a number of people in the drug trade, including Evans White, who appears to have had a fling with Inger. Then, there's Otto Rechtnagel, a gay clown, Toowoomba, an Aboriginal boxer, and Joseph a drunk who spends his days in Green Park, but who was once a sky diver.

So, we have quite a variety of characters, people getting beat up, getting drunk, and being murdered. It was a vaguely interesting book, but not my cup of tea for some reason. I have no idea why an elderly, single woman from Michigan would find the story engaging.

Oh yeah, as for the title, it seems that the bat is a symbol for death in the Aboriginal culture. Well, there was plenty of death in the book. I'm not sure I'll bother with any more books in this series, although a number of the folks at GoodReads claim this book is by far the weakest volume in the series. So, perhaps another book in the series would be worth a fling. We'll see.