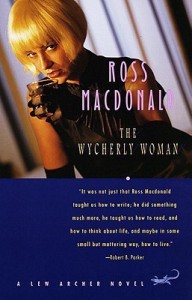 So nice to get back to something not icky and saccharinely sweet.

Horace Wycherly hires Lew Archer to find his daughter, Phoebe. It seems that Horace went off for a few months on a cruise to the South Seas, and by the time he got back, he found that Phoebe had left college and been missing for several months. Archer is sternly told that in no case is he to spend one iota of time checking with Horace's ex, Catherine. Phoebe and Catherine hated each other, he claims, and would never in a million years have anything to do with each other. What's he hiding?

Well, after poking around a bit here and there, Archer discovers that the last time anyone had seen Phoebe was on the day her father sailed off. Her mother also showed up and created rather a scene. Eventually, members of the ship's crew, aided by Phoebe, escorted Catherine off the ship and into the taxi that had been waiting for Phoebe. So, mother and daughter went off together in the taxi and, essentially, both vanished...or something. Then what? Well, it's a mystery?

We do have some vague reports that Phoebe might have been seen a few weeks later, or perhaps she was the body found in her car, which had been dumped over a cliff and into the ocean. Her mother appears, perhaps, to have surfaced for a short time, then disappeared again. A couple of people show up murdered in the house that the mother had bought, then tried to sell. Other associated folks get murdered.

Then too, perhaps, there is some tangle in the relationships between Catherine, Phoebe and Horace's sister, Helen, and brother-in-law, Carl, who appears to be the one who actually runs the family business.