Fruits of the Earth 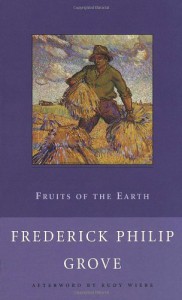 Every once in a while, one's gotta read about pioneers, right? Well I do. Perhaps it's because I discovered a few years ago, that my great grandparents would count as pioneers. Who knew? My great grandparents were pioneeers in the U.S., and here we're talking pioneers in Canada, but still pioneers on the prairies. Yes, they had prairies in Canada and they also had folks heading out west to homestead on the prairies.

In this case, we have Abe Spalding. He scouts out a part of Manitoba and eventually settles his claim on a spot of land that is vaguely higher than that around him. It seems that Manitoba has horrific floods in the spring, when the snow melts and the rivers flood. The slightly higher land drains more quickly and one can plow and plant more quickly. This is important in Manitoba, because the growing season is rather short.

Well anyway, Abe is a work-a-holic and is constantly working to improve things, to acquire more land and so forth. The less successful farmers hire themselves out to Abe so as to make enough to get by. As time goes on, the more families move in, schools are built, roads improved and so forth. So, basically, we have a story of the development of the Canadian prairies. We also have the story of Abe's success, and perhaps not-so-much success in his personal and family relationships. After all the hard work, Abe keeps coming back to the question, "what is this all for?"

A most fascinating book.