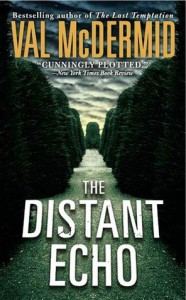 For some reason, this book is listed as the first of the "Karen Pirie" series. I'd read one further along the line (#5, I think it was) and figured to try to begin at the beginning. Karen Pirie has only a couple of cameo appearances in this book. Weird.

So, we begin in 1978. Four extremely inebriated youth are staggering home after a late night of partying and one of them falls across the body of a young bar maid, Rosie Duff. She's been stabbed. The police, not really knowing what to do, figure one of the boys is a chief suspect, and the tabloids certainly like them as perps. But, all attempts to find incriminating evidence on any of the boys is not to be found.

Then we fast forward twenty-five years. The police decide to open up a cold case, using the tools of modern forensics that were unavailable at the time of Rosie Duff's original killing. In addition, it appears that Rosie Duff had had a child at one time—immediately adopted off and well hushed— and he has decided that the boys must pay for having murdered his mother. He becomes quite obsessive about it. But, for some reason, most of the forensic evidence from 25 years previously has mysteriously disappeared.

Next thing you know, first one, then a second of the boys, now of course men with various careers, is killed off in suspicious circumstances. So what is going on?

Basically, the police don't seem to be doing much of anything, and it's some of the original four who begin doing a bit of sleuthing on their own to come up with a surprising solution.

This was a pretty interesting and engaging book, but as I said, attributing it to a "Karen Pirie series" is a bit of a stretch.