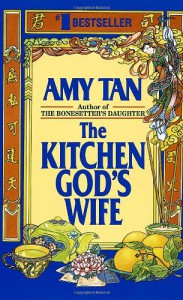 Well, it seems that I'm likely to have a Chinese-American son-in-law, so I figured I should begin learning something about his culture, or at least that of his parents. When my younger son lived in Japan, I read quite a lot of Japanese literature so as better to understand the culture in which he was living. So, now it's on to China, I suppose, so I can better understand my son-in-law to be.

This book is built around the sometimes troubled relationships between mothers and daughters and the secrets they hide from each other. In the end, they tell their secrets, prompted by Aunt Helen's promise to share the secrets herself, if the two women, daughter, Pearl and mother, Winnie, don't reveal their secrets to each other first. Aunt Helen, it seems, also has a few secrets of her own.

But the primary part of the book is a fascinating retelling of the life of Winnie's growing up in China shortly before the second World War until a few years after the end of that war when Winnie escapes a hyper-abusive marriage and also narrowly escapes the Communist take over. This tangled tale is needed to explain Pearl's biological forbears, a secret of some forty years.

A most excellent book. Although a work of fiction, I expect that the historical and cultural backgrounds are relatively accurate. That would be necessary, of course, in my efforts to understand son-in-law's background. Certainly there will be more Amy Tan in my future.