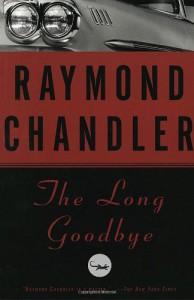 Raymond Chandler is awesome. On one level, he's writing your basic hard-boiled, noire detective fiction. But on another level, he provides well-drawn character development as well as intelligent commentary on the problems of society. His protagonist, Philip Marlowe is a smart ass, but somehow he's not so annoying in that role because it's clear that he's also basically a fundamentally decent human being.

In this book, Marlowe befriends a drunk. The drunk gets involved in some way with the murder of his rich-heiress spouse, who is also notoriously promiscuous, and flees to Mexico, where he apparently commits suicide. Marlowe isn't convinced the guy murdered his spouse, nor that he committed suicide. He becomes even more suspicious when fancy mobsters and rich tycoons make the effort to warn him off the case. Marlowe inadvertently becomes involved with several other people who seem also to be peripherally involved with the drunk and his dead spouse. Some of those people end up dead as well. It's all rather a convoluted tale, but quite interesting. Along the way, we are treated to some very wise commentary on the human condition. Little has changed in the past 60 years. Of course, if one has read Dickens or the Bible, one realizes that little has changed in the past 150 years or past five millenia.
Tweet