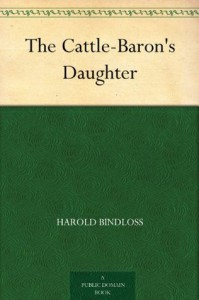 Well, this was kind of fun. We're in the early days out on the prairie. Although Bindloss is best known for books taking place in Canada, this one is most decidedly American. Lots of talk about American virtues and so forth. I'm thinking perhaps up in Montana, near Alberta, because late in the book there's talk about some characters fleeing to Canada. That wouldn't have come up had we been in southwestern Kansas or Colorado.

Anyway, we're all about the cattle barons. These guys leased land from the government and raised cattle and got rich as all get out. So, they begin to think the land is actually theirs and they get a bit pissy when the government opens up the land to homesteaders, people who will plow the prairies to grow crops and people who will put up fences. But, I'm getting a bit ahead.

We begin, actually, with a cattle Baron's daughter, Hetty Torrance. She's on a train platform in England. A young man comes up, Larry Grant. Grant is an old friend from the prairie. He and Hetty grew up together and are great friends. But Hetty, for some weird reason, isn't sure she "loves" him. Anyway, they have a nice chat and Larry goes his way.

Next up on the train platform is Capt. Jackson (Jake) Cheyne. He's in the U.S. Calvary, so I've no idea what he's doing in England. Whatever, he shows up and proposes to Hetty. She demurs, perhaps because having just seen Larry, she might be beginning to realize there's some "chemistry" with Larry (In those days, 100+ years ago, I'm not sure "chemistry" was a thing between young men and young women. Likely it had a different name.).

Well, off she goes with her friend, Flora Schuyler, with whom she's staying. Flora is perceptive and can tell there's something about Larry to which Hetty can't admit, but it's there just the same.

After a bit, Hetty and Flora head off to the prairie and settle in at Cedar Ridge, Hetty's father's spread. Well, there's all kinds of hooha going on. It seems that homesteaders are moving in. The cattle barons, for the most part, won't have it. So, they begin trying to take the law into their own hands so as to drive the homesteaders out.

Here's where the trouble starts. Larry, who is a rancher himself, realizes that the homesteaders have the better legal claim, and he works to help them get settled, and tries mightily to get the cattle barons to see the legal, and also "just" course of action.

Well, next thing you know, there are "agitators" shipped in from Chicago or some such place to try to create chaos, while pretending to side with the homesteaders. Larry tries to keep them in check. Then, one of the cattle people, somewhat of a bounder named Clavering (either Reginald or Richard, both used), tries to stir up some acts of sabotage himself, but done in such a way that the homesteaders will be blamed. Clavering also develops a thing for Hetty and even gets Torrance's blessing on his attempt to secure his daughter.

Well, Hetty is conflicted, as time goes on, she realizes that Larry is on the more just side, but she can't seem to cross her father. Fortunately, she has the good sense to keep Clavering at arm's length.

So, anyway, y'all will have to read the book yourselves to find out who wins out in the end, and whether or not Hetty and Larry finally get together. It was a pretty fun book all in all. While I rated this as ***, it's really ***+.