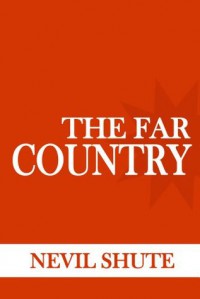 Nevil Shute never fails to deliver. At least he hasn't yet failed in the 11 books of his that I read. This wasn't quite so good, perhaps, as some of the previous ones because if felt a bit polemic in parts. But, none-the-less, it was surely a GoodRead.

Much of the story revolves around a "station" in Victoria, southeastern Australia, not too far from Melbourne. A station was a sheep ranch. Jack and Jane Dorman had struggled for quite some time to get situated, but in the past few years (1950+/-), the price of wool was quite good and they finally managed to pay off all their mortgages and had some money left over to throw around. They sent some back to England to their Aunt Ethyl. England's recovery from World War II was slow, and there was rather a lot of rationing still. Aunt Ethyl had been the only one in Jane's family who accepted Jack as spouse worthy back in the day. Aunt Ethyl was not faring well with the restricted life in England and was essentially starving herself to death, not willing to bother her children with her care. Her grand daughter, Jennifer Morton, hears of her problems and shows up to pitch in a bit to help "Granny" back on her feet. Just before Granny dies, she signs over the check from Jack and Jane Dorman so that Jennifer could go off to Australia to have a better life. Maybe things in Australia are like in the good old days in England, Granny thought, when everyone had nice garden parties, no worries about having enough to eat, and plenty of servants to do their bidding. Ah, the good old days.

Jennifer went to Australia, and very quickly felt at home. While out and about with Jack Dorman, they come upon a logging accident, in which one man has his foot trapped under a log (or bull dozer?) and another has his skull bashed in. They can't get the local doctor, so ask "Splinter", one of the loggers to help out. It seems that "Splinter", actually Carl Zlinter, had been a doctor in Europe before the war, and had come out to Australia as a displaced person. His medical credentials weren't recognized in Australia, so he was working as a logger. But, given his medical knowledge, he was the go-to guy to patch up folks injured in logging accidents. So, he amputates the foot of the guy trapped under the bulldozer (or log) and trephines the skull of the other guy to move the skull bones away from the brain tissue. The only person at the site with adequately clean hands is Jennifer. In addition, Jenny's bright as a penny ("her equal would be hard to find") and immediately becomes an asset to the surgical procedures. Naturally, Jenny and Carl slowly develop a relationship.

But a bit later, Jennifer's mother dies and she has to go back to England to keep house for her father. Will she and Carl ever get back together, one in Australia without job prospects and one in England with a grieving and overworked father? Well, read the book and find out.

The only blemish for me in this book was Shute's harping on how awful things were in England and how good they were in Australia. I know that England paid a high price during WWII and it took them a while to rebuild their economy, but I'm not convinced things were all that bad in 1951 or so when this book was supposed to have taken place. Then too, it seems that what Shute was really bemoaning was that rich people were less rich for a while after the war. They no longer could have a bunch of servants. For the regular Brits, I doubt 1950 was much worse than had been the case in 1920, when they were working in the ruling class sweat shops or being servants for the ruling class. But what do I know? I was only 6 when I lived in England in 1951, so perhaps I was too young to notice the deprivation. I certainly didn't feel any deprivation during my year there. Shute also has only scorn for the National Health Service. It seems that, like our current GOP, he didn't think poor people deserved to have health care and we'd all be better off if they just died. I dunno, I believe my brother broke a collar bone or ribs, or both in 1951, and the NHS patched him up just fine. Then, when I lived in England again in 1974, I was well served by the National Health Service when my daughter was born and when I stabbed myself with a piece of broken glass and bled all over my little closet of a lab.

Anyway, despite the polemical blemishes, this book, like every other one Shute wrote, is well worth one's time.
Tweet